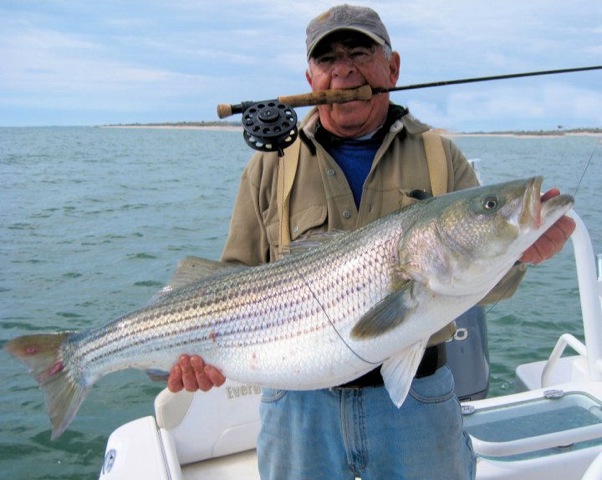 Sometime in May, when the water in Rhode Island’s saltwater ponds warms to about 60 degrees, several species of worms rise from the muddy bottom, spawn and wiggle about.  With luck, the worms will attract hungry striped bass, and with even greater luck, you can catch the bass on fly or spin tackle from shore or boat.  The event is commonly called the worm “hatch,” but is more accurately described as the worm swarm, a mating activity.  And it’s not limited to Rhody’s salt ponds; the same phenomenon occurs in Connecticut and Massachusetts.

There is no shortage of fishing magazine articles and YouTube videos about fishing the worm hatch.  In fact, there is an entire book devoted to the event, Fly Fishing The Worm “Hatch” And Other Saltwater Stories, by Woody Mills.   With all that good info out there online and in print, this article will add some local flavor and local knowledge based on personal experience from three aficionados, me first.

Here are some generalities.   The swarm starts slowly, reaches a peak, and then tapers off within the course of about two or three weeks, although some mating activity persists well into July and August.  The strongest mating activity is typically around the new and full moons, and while prime time is usually from dusk into dark, there could be a solid daytime bite in dense fog or heavy overcast.  The greater the number of worms actively swarming, the greater the likelihood that they will draw stripers in for a feast.  But, the more worms, the harder it is to get the bass to select your fly or lure rather than the natural prey.  Fly tackle has an advantage over spin gear because worms are typically small, less than three inches long, and seem to suspend just below the surface, so they are more readily imitated by flies fished on a floating line.  The advent of soft plastics, however, has made it easier for spin fishers to “match the hatch” by casting unweighted three inch Slug-Gos or similar baits that wiggle and dart to and fro on the retrieve.

Prime Rhode Island worm hatch locations are not secret, and they include such large sites as Ninigret Pond in Charlestown, Point Judith Pond in Narragansett (also known as the Great Salt Pond) and Colt State Park in Bristol.  There are lots of other spots, but if I named them or gave their precise locations, I’d probably get shot for “spot burning.”  You can find one on your own—look for a salt pond that drains into the sea or into Narragansett Bay, preferably through a channel or breachway, and fish the pond and the outflow on an outgoing tide.

As for tackle, I prefer a 7 weight flyrod with a floating flyline.  Most of the striped bass feeding on worms will be schoolies of 15 to 24 inches, and if a slot fish over 28 inches nails my fly, I’m confident that my 7 weight can handle the job.  Since I’ll be fishing in low light or the dark of night, a leader that is six or eight feet long ending in a two foot tippet of twelve pound test monofilament suffices.  Fly selection is a bit more challenging as some species of worms are orange and just over an inch long while others may be reddish or pink and three to four inches long.  Patterns I carry include Page Roger’s Velvet Cinder Worm, Paul Dixon’s Devil Worm, the Chameleon Worm variation, and the Chenille Cinder Worm.  You can find step-by-step tying instructions online.  I tie them in 2, 3, and 4 inch versions on barbless hooks.

RISAA member Eddy Stahowiak enjoys fishing the worm hatch with both fly and spin tackle.  He recommends light spin gear—about what you would use for Largemouth Bass—to cast pink Slug-Go soft plastic lures.  Eddy ties very innovative flies, and he was kind enough to share some photos of his creations that consistently fool stripers during the worm swarm in Rhody and on Cape Cod.  He prefers locations with a muddy bottom and strong tidal flow, and considers dusk to be prime time to fish.

Dave Pollack was for many years the Chairman of RISAA’s Fly Fishing Committee, and an avid “cinder worm emergence” (as he calls it) fisherman.  Dave usually starts searching for the worms on the first full moon in May because that brings an exceptionally low tide giving the sun a greater opportunity to warm muddy shallows and stimulate the mating activity.  Dave favors an 8 weight fly rod with a 9 weight line to counter any windy conditions, and opts for a fluorocarbon tippet of  at least 15 pound test.  If he does not see bass rising to gulp down worms nearby, Dave scans the area for birds dipping to snatch worms from the surface—a likely sign that there are stripers over thataway—and gives chase.

One last point:  As it has for many years, the Rhode Island Department of Environmental Management, coordinating with the U.S. Fish and Wildlife Service and the National Wildlife Refuge System, will be offering a Cinder Worm Workshop in May at the Kettle Pond Visitor Center in Charlestown.  The Workshop is open to adults and children over age 10, is totally free of charge, and includes both fly tying and actual fishing under the guidance of experienced hands.  Dave Pollack and RISAA member Captain Ray Stachelek, a well-known and highly regarded professional fishing guide, will both be actively involved in the Workshop.  For more information, you can contact Dave via email at dpollipo@gmail.com .