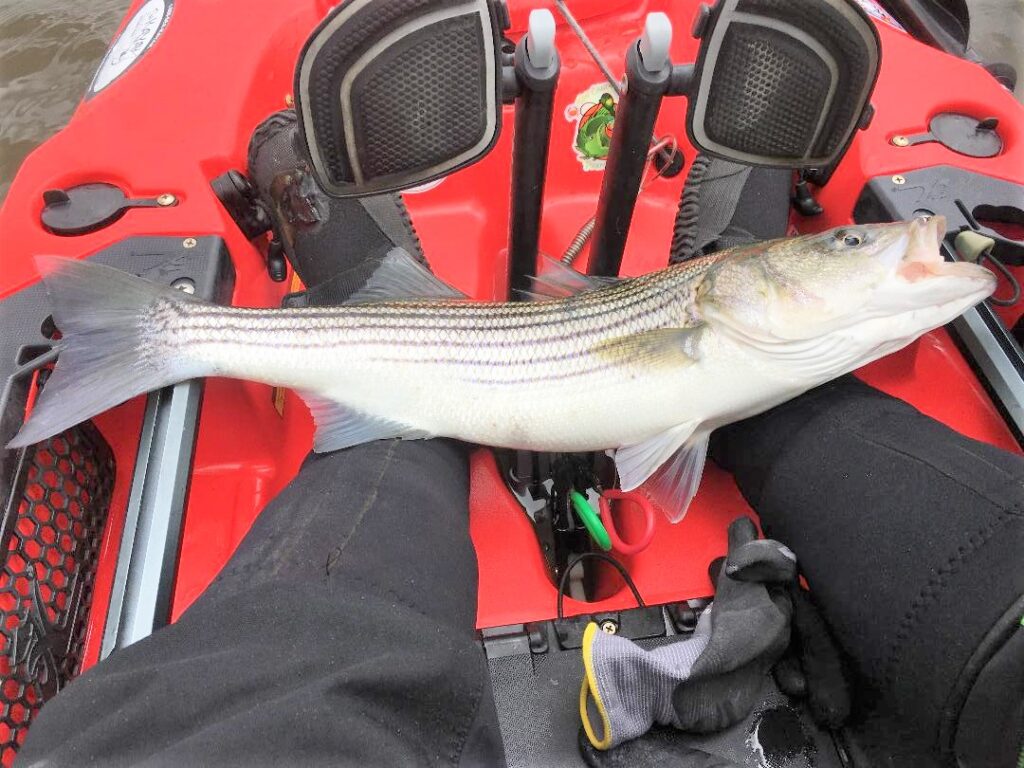 I’m a creature of habit when it comes to starting my fishing season each year. I generally like to start by jigging for squid early spring and getting some to use as bait later in the season. There are a few good well-known spots to do this in and some not so well known areas of Narragansett Bay. I’ll not venture into this topic as it has been covered in a few articles and seminars by some talented fishermen.

The fish I like to target each season generally are striped bass and tautog. I begin my season in mid-March investigating a couple of herring runs and determining when the herring show up in decent numbers. Once the herring are here I know that in a few short weeks the first striped bass will start to arrive in Narragansett Bay. There are holdovers that populate a few of the fishing spots that I catch at, but these will not have sea lice on them. The newly arrived striped bass can be identified as having sea lice on them.

I like to work several locations in the West Bay to locate the bite. I use light tackle, such as a Cheeky 3500 or Penn Battle 4000 spinning reels paired with 7’6” Ugly Stiks rated medium. For lures I use a variety of tackle such as ¼ ounce jig-heads paired with Zoom Flukes, Pawpaws jigs (Instagram), and some top water lures such as small Smack-it poppers. I work a full-time job, so these shore excursions usually run no more than one hour in length each day prior to work. Once I get on a bite I know it is time to start planning longer fishing trips from my Hobie Outback kayak on my non work days.

Fishing from a Hobie Outback has been a game changer for me. My legs do all the work leaving my hands free for fishing. There are several decent launch areas in my local area that can get me on the fish fairly easily. These early season launches serve two purposes. One it gets my legs back in shape after the winter layoff. Two it gets me back into fishing and catching mode.

It would be a disservice for me to not talk about kayak safety at this point. First and foremost dress for the water temperature not the air temperature. I use dry pants, dry top, thermal underwear, wetsox (WORN), NRS Boundary boots, gloves, knit hat. Some kayakers prefer dry suits, semi dry suits, waders, etc. I’m not going to debate the merits of each… use what works for you. Be sure to have a good PFD, I prefer the NRS Chinook OS. A whistle, compass and floating marine radio are good items to have as well. I like to leash my paddle to the kayak as well. Even with all this safety gear if you can also launch with a buddy it will add to your safety precautions by diminishing some of the risk. Keep your phone in a waterproof case or sealable plastic bag in a pocket of your PDF. You are now able to launch safely and confidently. No one wants to become a statistic, but it happens every year.

Once I’m on the water peddling the mirage drive to my destination I like to deploy one of my pre-rigged rods to start trolling. It could be a paddle tail, soft plastic (zoom fluke) or a Crystal Minnow lure. The areas I fish are known to me, but I still use a Lowrance Elite FS with three split screens, map, down scan and side scan. This view combines to give me an excellent view of what is going on above the waterline as well as beneath the Outback hull. I can identify schools of bait, fish, structure, channels and drop-offs. Generally I have some of these areas marked as spots that I previously caught fish at or observed an interesting feature to investigate at a later date.

Once I hook up with a striper I will stop in the area and work the water by casting zoom flukes, paddle tails and top water lures. Early season success for me usually happens with the smaller paddle tails (3.5” to 4”), super zoom flukes and Bomber lures. Small profiles usually generate a consistent bite. I’m not necessarily looking for huge numbers. Just a bend in the rod, a few laughs with friends on the water or the solitude of fishing alone.

Fishing for spring Tautog happens early in the season along with the smaller striped bass. The tactic is definitely different than the fall season. I am targeting known structure, generally in depths of 12 – 16 feet of water depending on tide. I like moving water, either incoming or dropping tide. Look for rocky areas, dock pilings, bridge abutments. I will use crabs as bait, but squid and worms can be used in a pinch. I use a 7’ Ugly Stick spinning rod with a Penn Clash 5000 reel. This past year I made a concerted effort to use small jigs to catch the Tautog. No more than 1 ounce and sometimes ¾ ounce jigs were used with success. Tautog fishing has always been my Achilles heel.  I never landed good numbers for a variety of reasons, but I have noticed as I have gone lighter with my tackle I seem to be catching more. Be sure to try a variety of methods to determine what works for you. Striper and Tautog fishing from a kayak can be challenging at times with the wind and tides, but keep at it and eventually you will be successful.