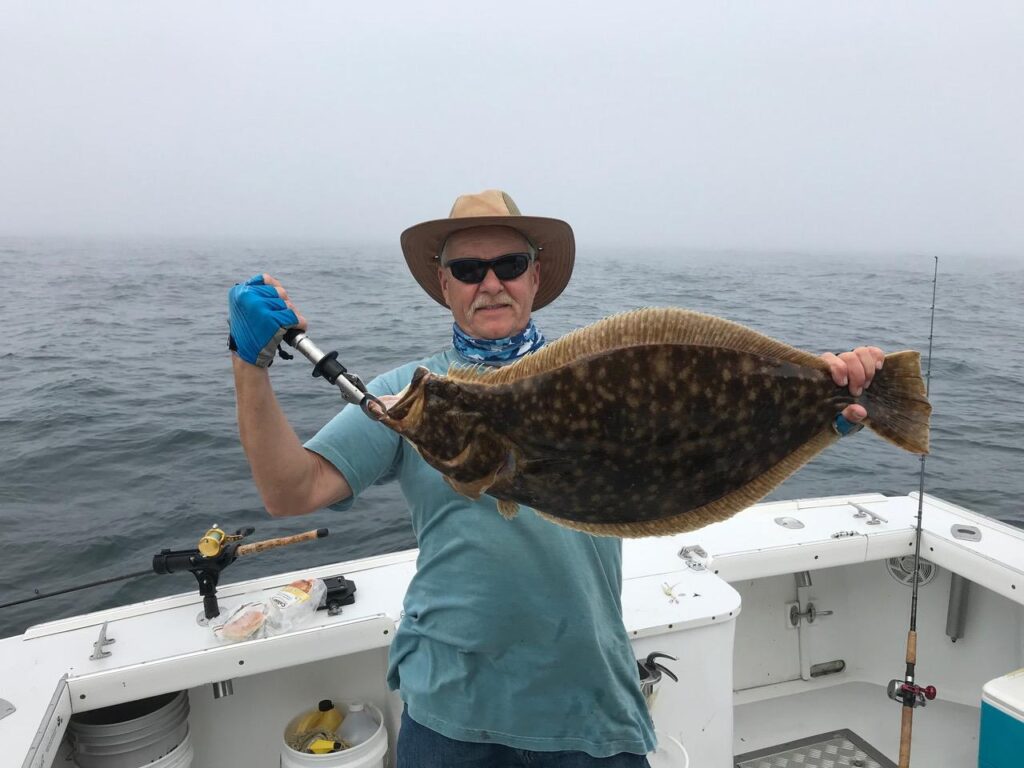 Summer flounder (fluke) fishing got off to a great start this year.

On Saturday, May 21, 2022 Peter Johnson of Connecticut said, “I limited out on fluke in eighty feet of water in the Block Island Wind Farm area.”  Peter is a firm believer in going light. He uses 15 pound braid, jigs and stingers tipped with gulp and sometimes squid strips.

Two years ago Peter caught one of his personal best, a 28” fluke right in front of Warwick Light in Narraganset Bay fishing the banks and deep water in the channel. Peter said, “This is the largest fluke I ever caught.   I have been waiting for this a long time.  I caught this, 28” fluke using 15 pound braid line… a white four once buck tail jig with white feathers did the trick. The idea is to keep it light.”

Angler Rich Hittinger of Warwick did manage a personal best in 2020 just outside of the wind farm area when he caught an 11.16 pound, 30” fluke.  Hittinger said, “We moved to 50 feet of water to avoid some of the dogfish. He fish hit a trailer hook with a green squid skirt. I had a 10 once sinker holding bottom. She fought from the bottom to the top, taking drag several time.”

And who can forget the scream heard off Newport last year when RISAA Executive Director Greg Vespe of Tiverton caught a 15 pound, 8 once, 31.5 inch fluke while fishing off Newport with his friend Capt. BJ Silvia of Flippin Out Charters.

Greg said, “My rod just got heavy, no nibble or classic kind of tap tap, the whole thing loaded up. For a second I thought I had a lobster pot line, then you could tell it was definitely something alive and it came up relatively easily the first 40 feet. When it realized it was hooked it decided to fight, and what a fight.  Even though my drag was tight she went all the way back down to the bottom and bulldozed for a bit.  Finally she started to come back up. When we saw it I let out a holler that is probably still vibrating around Newport.”

Summer flounder (fluke) fishing in Rhode Island runs from May 3 to December 31.  The minimum size is 18” this year which is liberalized from last year’s 19” fish.  The bag limit this year is four fish/person/day. In Massachusetts the season is May 21 to September 29, a 16.5” minimum size with a five fish/person/day limit.

Look for drop offs, structure, the banks of channels, and deep water particularly in the warm weather, in spring time they tend to be in lower depths.  Favorite places:

Visit www.youtube.com/watch?v=9D1p71n8p4g&t=185s for a video with Capt. Dave Monti, Kelly Parker and Tom Richardson, co-hosts of New England Boating TV, they fish for fluke off Jamestown.