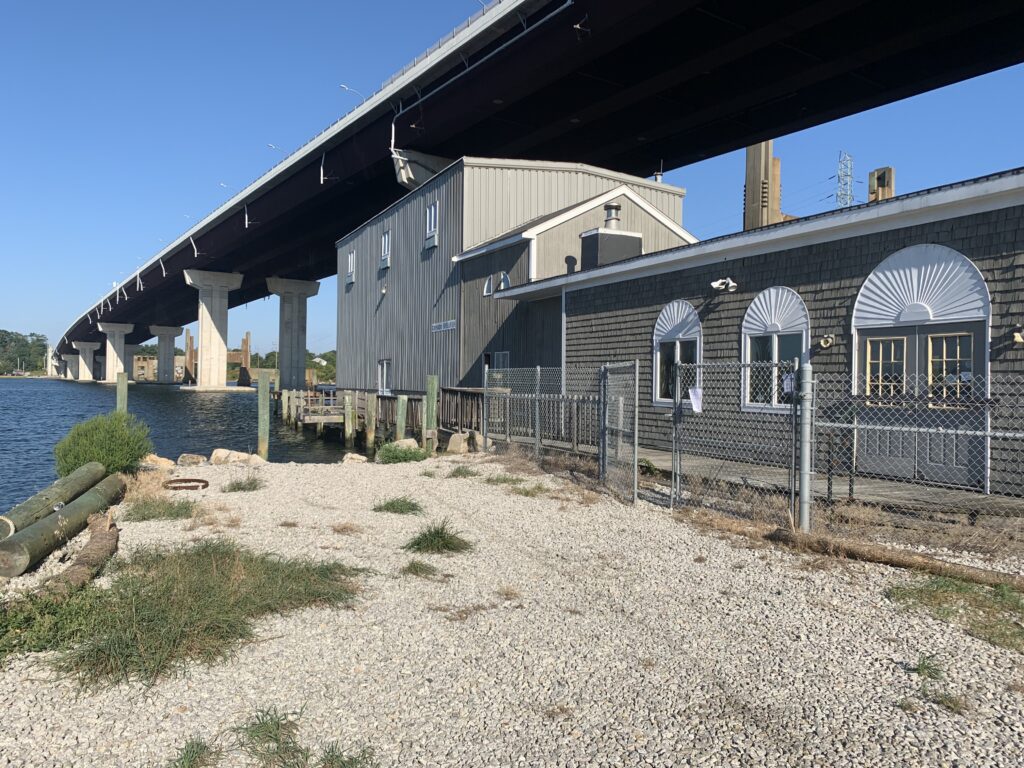 The Chase Marina facility is located in what is commonly referred to as the Tiverton Basin close to the northern end of the Sakonnet River. The lower shores of the Sakonnet are largely residential and/or pastoral with the exception of the Basin which hosts both recreational and commercial craft. Sakonnet Harbor is at the southern end of the waterway also has a mix of recreational and commercial craft including a significant operation to support commercial fish trapping in the inshore areas.

Our vision as described below is to create a recreational angling center that can be used for education and outreach to the recreational angling public and partner with RIDEM Division of Marine Fisheries and local Universities. This location is uniquely positioned for that activity because of the adjacent boat launch ramp and public fishing pier already frequented by underserved and minority communities who fish for food from here. In addition, slips that would be used for berthing recreational charter boats would support many small businesses and help to increase recreational fishing activity in the East Bay region.

According to NOAA, recreational fishing accounts for $419 million in economic impact in Rhode Island and 3,773 jobs (without imports). Further, recreational fishing dovetails into the Rhode Island Marine Trades industry with its $2.649 billion in impact and 13,337 jobs. While recreational fishing enjoys a positive and mutually beneficial relationship with RIDEM – especially in Marine Fisheries—there are no berthing or office facilities to support recreational fishing in our State. This is in contrast to commercial fishing (a smaller industry) which has state-sponsored facilities support in the Port of Galilee, Pier 9 in Newport and the Commercial Fisheries Center at URI. We believe that our proposal will have broader social and economic benefit to the area while at the same time create fewer social and environmental conflicts.

Description of the Proposed Operation

We envision a Recreational Fisheries Center that would provide a focal point for recreational fishing activities serving as a catalyst, conduit and facilitator of habitat and fisheries research that supports recreational fishing, fish and fishing advocacy, public access to the water and fishing as well as an overarching mission of education. Our goal is to educate the public on the beauty and value of our waterways and to foster a lasting commitment to advocating for and preserving our marine habitat.

The facility would contain a mix of classroom/meeting/lecture space, “hands on” areas for demonstrations and skill-building, research space (likely in the rear segment) and office space for staff. The latter would be in the existing upstairs office space.

Our Vision and How it Relates to the RFI

We believe the vision set forth in the RFI for a commercial fishing facility is rather narrowly focused on a small number of commercial operators and presents some serious potential conflicts with the surrounding community, some members of which have already voiced concerns in the initial hearing stages. Our vision for a Recreational Fisheries Center (RFC) is focused on broad outreach to many constituencies such as:

As noted in the introduction of this Recreational Fishing Center proposal, all or some of the Chase Marina space could be used depending on Rhode Island DEM Marine Fisheries input.

Programing possibilities for the entire space is desirable, however, RFI respondents are flexible in terms of the amount of space required pending DEM input and that of industry partners and universities. This would be refined in the Request for Proposal phase.

Opportunities exist to partner with Universities coordinating the fisheries research and learning center as well as possibly partnering with DEM and their Aquatic Resource Education department and/ or an East Bay satellite office for the Access Point Angler Intercept Survey program. Pending DEM input an RFP for the Recreational Fishing Center could include:

Capital improvements to the facility depend upon programing components agreed upon (noted above) and would be refined during the RFP process.

The Recreational Fishing Center respondent is agreeable to explore funding of capital improvements in consideration for lease fee credits if necessary.

We are uniquely positioned for funding due to the established Rhode Island Saltwater Anglers Foundation (a 501(c)3 entity), our relationship with offshore wind developers, the relationship our members have with licensing and saltwater licensing funds, the respondent’s relationships with research scientists at Roger Williams University, the University of Rhode Island Graduate School of Oceanography, university fisheries programs, the Costal Resource Center, Rhode Island Sea Grant as well as a host of environmental and marine non-governmental organizations.

As part of the planning process the recreational fishing Center would conduct a community and industry study to further identity partners, resource commitments, feasibility and support
commitments.

Employees of the Center would vary depending on agreed upon programing. Staffing may include an executive director, a research and education coordinator, as well as a fund development coordinator/administrative support person. Ten to twenty partially paid volunteers would conduct the training and education work of the Center on an as needed basis.

Benefits of the Center

Benefits are numerous and would include the following depending on approved programing at
the Center:

Nature of Partnerships or Regional Collaboration

The Center’s mission is rooted in education and training, research, economic development, social environmental/economic justice and the support of culture of fishing community in Tiverton, the East Bay and the State. The Center aims to bolster local, state and regional efforts to address impacts of climate change on the industry i.e. fish stocks, habitat, access, social environmental justice and a host of other climate impacts.

Examples of such past collaborations include the AnglerCatch program with partners DEM and Harbor Light Software, fishing camp with partners DEM and the city of Warwick, recreational education that takes place with monthly seminars, the largest recreational fishing show in the northeast that takes place each year, the Southern New England Recreational Fishing Symposium that addresses major (and often times controversial) fishing issues, support of habitat and fisheries though fish ladders, boat ramps and research grants, support of the Baird Symposium on Climate Impacts on Recreational fishing and boating, as well as the annual Take a Kid fishing program that has partnered with hundreds of cities, towns and youth organizations to introduced thousands of Rhode Island youth to fishing teaching them how to fish for fun responsibly setting the table for them to become good stewards of the environment.